As summer slowly comes to close many kids wish it would go a little longer. Someone once said, “All good things must end.” However, that’s not true, not all good things come to an end. Paul says in Philippians 4:4, “Rejoice in the Lord always: and again I say, rejoice.”

So rejoice, and when you’re done rejoicing, rejoice again!

As we have reached the end of our summer here, my focus moves to retreats that will be taking place. We host our three Ladies Retreats next month, and then in October, we host our Junior High retreat called Exiled.

Exiled for Students in Junior High

Exiled is an experience unlike any other as Junior High campers are placed in a scenario for the entire weekend. Two years ago, for example, they traveled back in time to a once-Communist Romanian country for what we call Exiled. They were stripped of their Bibles as they arrived for the weekend. Their first task as a cabin was to write down as many verses from memory as they could. Lessons taught here showed the campers how much of God’s Word they actually had hidden in their hearts (Psalm 119:11). Campers were lightly “persecuted” for their faith during their weekend. They were challenged on whether they were just committed to God, or completely surrendered to God.

This past year they experienced Exiled – Tribal. Soon after arrival at camp, they realized they were not alone. A nomadic tribe had moved on to the campgrounds. The campers were trained to share their faith, and trained on how to overcome unique cultural and personal barriers. Through that, they were challenged to reach the tribe for Christ during their weekend. By the end of the three-day retreat, campers were comfortable with sharing their faith story with others. Furthermore, they left with the tools to go home and impact their ‘worlds’. 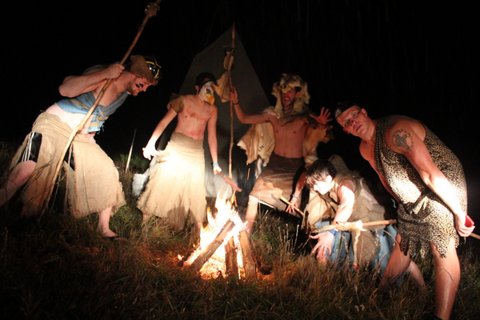 A Life Touched by Christ

I am particularly excited about this year’s Exiled as we launch an all-new program called “Exiled – A.D.” This year’s theme will be “A Life Touched by Christ”. As campers go through their weekend here at camp they will meet many Bible characters that have had their lives touched by Jesus. They will interact with the blind beggar and one of the ten lepers, and they will hear them tell their stories during chapel sessions. Camper will see the Last Supper played out before them and watch the betrayal and arrest of Jesus. Each Junior High student will be challenged on how a life touched by Christ changes, and what it should look like after.

We are rejoicing over the impact God had this summer at Lake Ann Camp, and we are preparing to rejoice again on the impact He will have during our retreat season.